Last week, the German Council delegation shared a “non-paper” with proposals to mitigate the negative effects of article 13, which screamed “Houston, we have a problem”. On Monday the Romanian Council Presidency shared a working paper on article 13 that makes similar attempts to reduce the negative impact of article 13. And yesterday the representatives of the audiovisual and publishing sectors called for the suspension of the negotiations on article 13. These moves show that (1) upload filters are gaining opponents (or losing supporters) at a fast pace and (2) lawmakers are starting to envision the social and political consequences of this ill-conceived law proposal.

The Romanian proposal attempts to save the sharing culture, but fails spectacularly

Ahead of the Council Copyright Attachés meeting that took place yesterday, the Romanian Council Presidency proposed a possible compromise solution on article 13 that 1) exempts platforms from liability in certain situations (e.g. if they made best efforts to obtain an authorization from the rightsholders) and 2) introduces a mandatory EU-wide user-generated content exception to copyright, which allows users to upload and make available content generated by themselves, but not by others. The Romanian compromise further suggests to continue to discuss if online platforms that are microenterprises and small-sized enterprises shall be exempted or not from the obligations imposed by article 13.

The fact that the compromise solution presented by the Romanian Presidency contains the introduction of a UGC exception shows the intention to make a positive contribution to the negotiations. However, the drafting is far from bringing a meaningful solution for users. To start, the proposed exception only allows the use of parts of works, making it impossible for users to share user-generated content containing an entire artwork (e.g. a meme using a painting in its entirety) or an entire short work (e.g. a meme using a poem in its entirety). Then, it only allows users to share content generated by themselves, and not by others! What is the point of sharing a meme on an online platform, if other users cannot interact with it, by sharing it too?

Last week, the German delegation proposed a remunerated UGC exception (basically, paying for sharing a meme) and left us wondering if the lawmakers understood the rationale (freedom of expression and freedom of creation) behind a UGC exception and the value of platforms to users. The UGC exception now presented by the Romanian Presidency as a possible compromise solution only reinforces our concerns about the ability of lawmakers to foresee all the consequences of their proposals.

Again, there were good UGC exceptions on the table, such as the ones proposed by CULT and IMCO and also by individual MEPs. There’s no need for lawmakers to keep reinventing the wheel, if they really want to take a step in the right direction and adopt a mandatory EU-wide exception that will – provided that no upload filters are in place – facilitate everyday sharing practices that are for purposes such as criticism, review, caricature, parody, etc.

Meanwhile, the direction in which the negotiations on article 13 are going continues to swell the ranks of its critics. Several organisations representing rightsholders from the audiovisual and publishing sectors are “extremely and increasingly concerned” and, thus, have called for the suspension of the negotiations with respect article 13. According to these organizations, the Commission should wait for a decision of the Court of Justice of the European Union in case C-682/18 concerning Youtube’s liability for copyright-infringing content uploaded by its users, and only then decide whether legislative intervention is necessary.

We are still far from having article 13 either deleted or turned into something acceptable but there are more and more signs that support for article 13 in its current form is eroding: 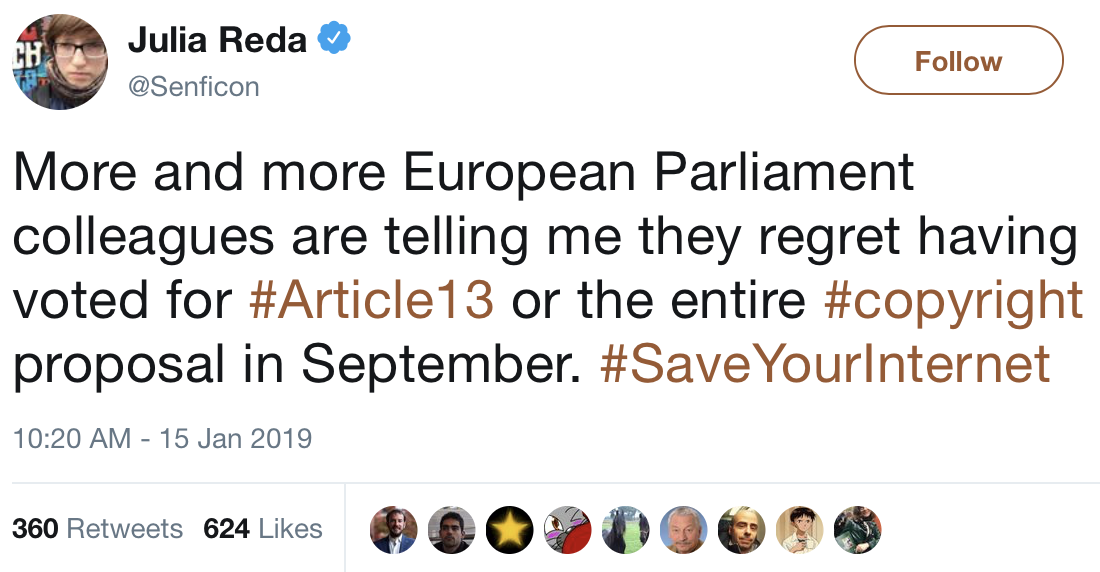 Featured Blog post:
We Are Looking for a Policy Advisor
by COMMUNIA Association
Read more
Newer post
Ahead of last trilogue: on balance the directive is bad for users and creators in Europe
Older post
Germany’s non-paper on art. 13 screams “Houston, we have a problem”