Last week the Committee on the Internal Market and Consumer Protection (IMCO) released a  draft opinion on the proposed Directive on Copyright in the Digital Single Market. It’s not bad. Rapporteur Stihler’s opinion makes it clear that the European Commission’s proposal is seriously flawed and requires substantial changes. It contains proposals for amendments that address many of the issues with the original proposal.  This week we’ve written more extensively on these, including the suggestion to drop the ancillary copyright for press publishers, the broadening of the TDM exception to permit mining by anyone for any purpose, a potential fix to the content upload filtering mechanism, and the continued problematic reliance on licensing within the exception for educational purposes.

We are pleased that just as in the draft CULT opinion, IMCO acknowledges the importance of protecting and strengthening user rights. Rapporteur Stihler’s broad scope is especially important, as it would permit a person “to use an existing work or other subject matter in the creation of a new work or other subject-matter, and use new work or other subject matter”. In other words, it doesn’t matter what a user needs the protected content for, he or she may just use it as long as they create something new with it. For reference, CULT’s draft opinion proposed a UGC exception to apply primarily when it serves criticism, illustration, parody, etc.

IMCO’s draft opinion includes a condition that a user may take advantage of the UGC exception when “the use of the new work is done solely for non-commercial purposes”. Interestingly, while debating the issue, IMCO members could have looked at the CULT draft opinion, where the use must be “in accordance with fair practice and in a manner that does not extend beyond the specific purpose for which they are being used” to qualify for the exception.

The reason for considering the CULT approach is that their option could provide more legal clarity, as it’s often difficult to determine what “non-commercial” means. Would posting a meme on Facebook be considered non-commercial, even if the platform screens ads alongside UGC content? If there is a way to remove such obscurity from the practical uses of the exception, IMCO members should embrace that possibility.

In essence, draft IMCO opinion provides a great basis for introduction of the much needed UGC exception, especially if it can embrace a broad, flexible scope. It would be made even stronger if the IMCO shadow rapporteurs used the CULT approach to amend their text so that use under the exception was conditioned on fair practice.

There are other import user-rights issues that the original directive proposal ignored. The Commission decided not to introduce an exception for freedom of panorama in their proposal for a Directive on Copyright in the Digital Single Market. It is also not introduced as an amendment in the draft IMCO opinion (although it was suggested as an amendment in the CULT draft opinion, for at least non-commercial reproduction and use). We continue to ask the European Parliament to introduce a broad, EU-wide freedom of panorama right that applies to both commercial and non-commercial uses of all works permanently located in public spaces. The amendment text should communicate that any contractual provision contrary to the exercise of the rights provided for in the exception will be deemed unenforceable. Supporting a broad commercial right to reproduce and use works in public places would give users the legal clarity and assurance to share their works across borders, and generate economic activity, such as commercial publishing of photography.

It’s clear we’re not the only ones who find strange the addition a panorama exception in the draft CULT opinion, but not in the IMCO draft. With so many user-rights friendly changes offered by Rapporteur Stihler, it’s odd that we didn’t see a similar (or even stronger) amendment in support of freedom of panorama in her opinion. Apparently even Stihler thinks it could be introduced as an amendment, as she noted in a response to MEP Felix Reda on Twitter: 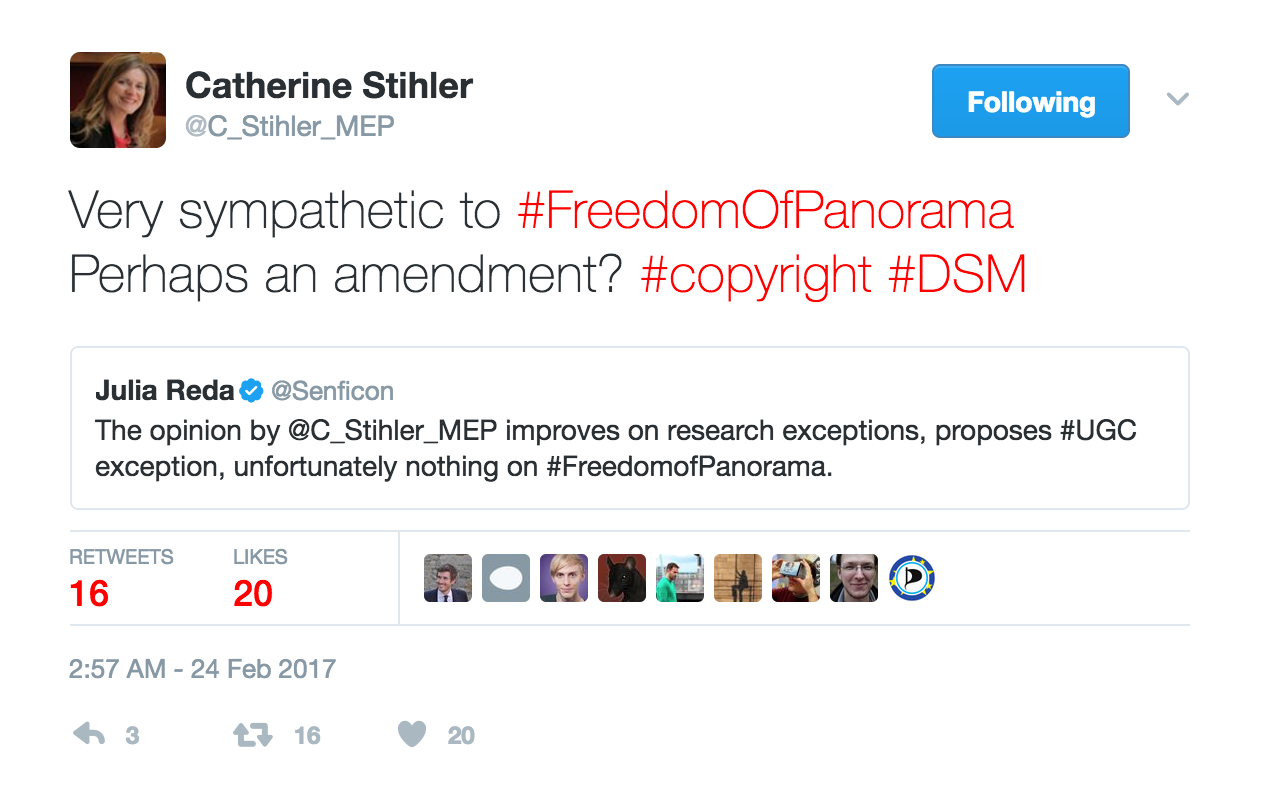 Let’s hope that freedom of panorama won’t be left out because everyone seems to think it is such an easy thing to introduce at any stage. The time to act is now.

Featured Blog post:
We Are Looking for a Policy Advisor
by COMMUNIA Association
Read more
Newer post
Draft opinion from research committee promotes a TDM exception available to all
Older post
MEP Stihler means well for education, but there is serious room for improvement