In less than two weeks the European Parliament will vote on its position on the Copyright in the Digital Single Market directive. After the resounding rejection of the JURI mandate on the 5th of July, MEPs are searching for compromises that will allow the European Parliament to enter into negotiations with the Commission and the Member States. A key to finding such a compromise will be a new version of Article 13 that reflects the broad opposition against the upload filters that led to the rejection of the JURI mandate in July.

Last week Friday MEP Axel Voss presented his proposal for a new compromise on Article 13. According to Voss the new version answers to the demands voiced by critics of the original JURI text (and he expects those critics to support his new version):

The new proposal for #copyrightdirective does not forsee any measures/„upload filter“ … Now I expect everyone who was against the previous proposal because of this to support the new proposal.

Unfortunately this does not mean that MEP Voss has suddenly taken the concerns raised by users, academics, civil liberties organisations and many others into account. Instead he is proposing a version of Article 13 that would be even worse than everything that has been on the table so far. His newest “compromise” proposal consist of a simplified version of Article 13 that would make all online platforms that allow users to upload content (other than a select few) directly liable for copyright infringements committed by their users:

(1) Without prejudice to Article 3(1) and (2) of Directive 2001/29/EC, online content sharing service providers perform an act of communication to the public.

As a result open platforms would need to obtain licenses for all copyrighted content that could possibly be uploaded to such platforms, which is of course impossible since not all copyrighted content is available for licensing. In practice this will mean that platforms need to filter out all copyrighted works for which they do not have a license. Contrary to what Axel Voss wants us to believe, his latest proposal would mandate upload filtering on an unprecedented scale (see the flowchart below for a more detailed analysis).

Even worse, the new proposal does away with any safeguards for user rights that existed in previous version of Article 13. Instead the compromise proposed by Voss lets rightsholders and platforms to determine if users should have any rights (emphasis ours):

(2) Licensing agreements which are concluded by online content sharing service providers with rightholders for the acts of communication referred to in paragraph 1, shall cover the liability for works uploaded by the users of such online content sharing services in line with the terms and conditions set out in the licensing agreement, provided that such users do not act for commercial purposes.

In other words, Voss wants to relegate user rights to something that platforms and rightsholders can bargain away as a part of the terms and conditions of licenses.

It is difficult to see how Voss envisages his latest proposal, which is clearly more restrictive than the text that didn’t receive a mandate from the EP plenary in July, to secure a majority. His approach confirms once more the perception that MEP Voss has utterly failed to understand that there are real concerns from users regarding any form of upload filtering.

Finding a workable compromise on Article 13 will require MEPs to properly understand the concerns that users, academics and civil liberties organisations have brought forward. As long as all legitimate opposition to upload filters is simply equated with acting on the behalf of big technology companies, a real compromise is far out of reach.

It is clear that an attempt to limit the dominant position of big online platforms by turning these platforms into fully licensed outlets for mainstream culture will stifle European culture,not save it. Europe’s users and creators deserve better from their elected representatives! Let them know this via saveyourinternet.eu. 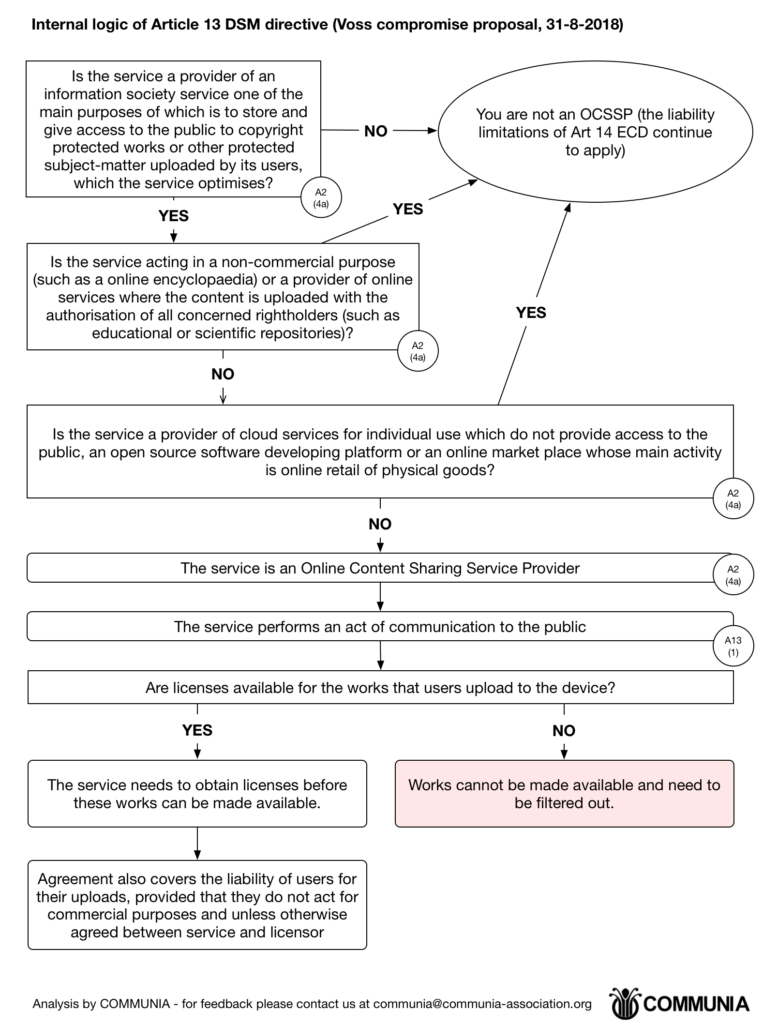