Last Wednesday, June 21st, COMMUNIA organised an event in the European Parliament, hosted by MEP Marietje Schaake (ALDE) on copyright reform for education. We wanted to share one important voice often overlooked in the copyright reform, that of the educator. What is the type of copyright exception that we need to support 21st century education? We heard from practitioners, experts and policymakers during the event.

After an introduction by Marietje Schaake and moderator Lisette Kalshoven, we officially presented the results of the RIGHTCOPYRIGHT campaign to MEP Schaake. As Alek Tarkowski noted:

“In the copyright reform debate, we tend to see copyright as a core issue. For educators, copyright is a tool – or a barrier – to attaining educational goals. We should not forget this.”

Over 4800 people have supported the petition for a better copyright reform for education to date, and we hope MEP’s will listen to their demands. 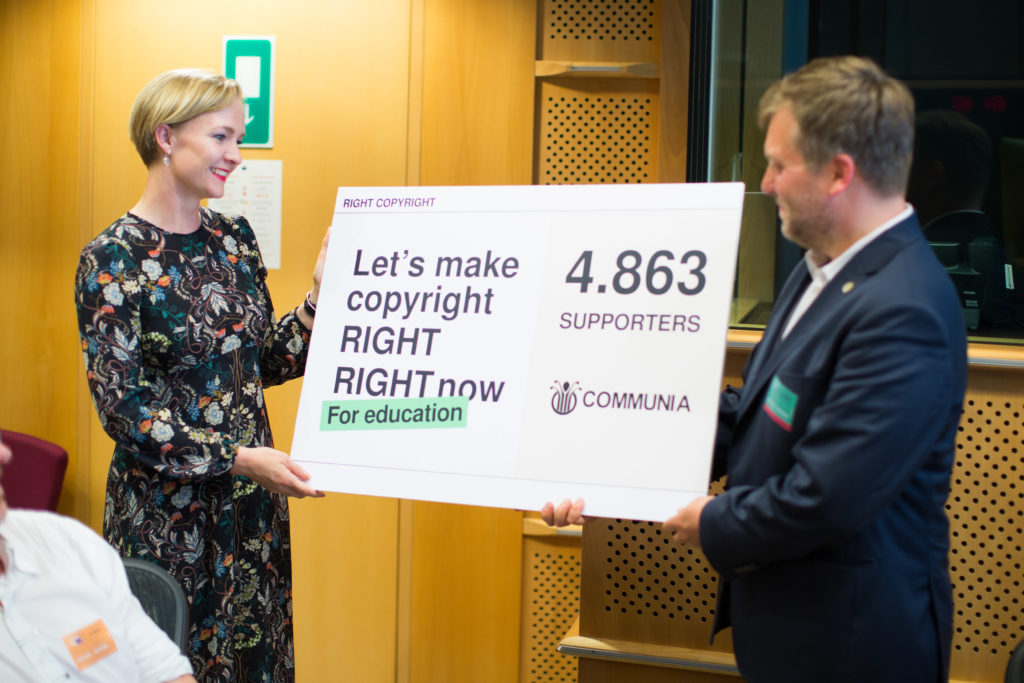 Next we heard from Hans deFour, founder of KlasCement a very successful online educational resources platform in Belgium. More than 70.000 educators from Flanders are members, which means almost 50% of educators in primary, secondary and special education. KlasCement currently has a team of about 10 validators checking for copyright mistakes in the educational materials. They have to disapprove 15% of all shared content because of a (possible) copyright violation.

Often the educators write their own texts, but they use single images from the web to illustrate the assignments. The members note that it is very difficult to trace the owner of the images, because the images are copied online so many times before. Hans noted that sometimes educators try and fix the mistakes and re-share, but often an educator can’t or won’t and the resource remains unshared. He notes that it is very difficult for its members to understand what is, and what is not allowed. For example a picture of the Eiffel tower by day is okay, if you took the photo yourself, but at night it is supposedly a copyright violation because of the light show.

How copyright affects the work of history educators

Steven Segers, deputy director of EUROCLIO shared from a survey about copyright he did amongst its members, gathering over 100 reactions from 35 mostly European Countries. For example, a history educator from Italy noted:

“I often need to show movies, documentaries or parts of them in my classes, but I risk every time to be fined. I do it anyway, but I am always worried.”

Steven remarked that it is unwanted for an educator to be scared every time he uses visual resources in the classroom, with the ambition to simply educate the students the best way they can. The respondents of the survey also wrote that they simply do not know whether they have violated copyright, as they do not know enough about the subject.

Steven: “We believe that copyright regulations should enable and protect educators to deliver the best education for their students. What we need is a copyright exception for education, that is easy to understand, that applies in all EU countries, and is suited to the realities of education.”

Not having this is a serious downside on the quality of education as:

“dealing with copyright takes time away from the core business of teaching.”

The role of libraries in education

Next we heard from Maria Rehbinder, member of the Copyright Working group of LIBER and legal counsel at Aalto University. She noted:

“We advocate for a mandatory exception to allow using works or other subject-matter in digital teaching activities, including online and across borders. We are the voice of thousands of educators, researchers innovators, libraries and scholarly institutions.”

She spoke about the situation in her home country of Finland: universities purchase an extended collective license allowing for educational use. Together these universities pay about 4 million euros a year to the collecting society Kopiosto, who represents publishers and other rightholders. Materials can only be used by course participants and have to be removed after the course, which limits the use of digital materials.

Kopiosto conducted, together with the university, a study in 2015-2016 on digital university materials. From the study they learned that educators, lecturers, researchers and teachers who create digital educational resources at university, write their own text to their slides. The copyrighted resources teachers use and need are images to illustrate their text. According to said study, 47% of third party materials used by teachers in their resources are single images found online – and not images found on textbooks or otherwise sourced by publishers. Nevertheless, publishers are getting compensation for those images that they have not published. That happens because the authors of those materials are not necessarily members of Kopisko and, therefore, the licensing fees paid by universities to Kopisko are not being redistributed by them.

Maria also noted the legal uncertainty as related to the licensing approach in Finland, especially the recent Soulier and Doke CJEU case. Overall, she prefers an exception based approach, above a licensing based approach.

Copyright and Education in Europe

For instance, Teresa noted that most of the countries analysed do not prevent teachers from using email, cloud services, and other modern tools to share certain educational materials with their students. The Commission’s proposal could follow the example.

Another highlight coming from Teresa’s research is that the majority of the countries under analysis does not discriminate against the person or entity running the educational activity, focusing solely on the educational purpose of the use. Still, several countries only cover formal educational establishments. An amendment to the Commission’s proposal would be necessary in order not to leave museums, libraries and other providers of non-commercial education behind in those countries.