In the end, nothing happened. When the European parliament adopted a compromise version of MEP Reda’s evaluation report of the EU copyright directive, the attempt of MEP Jean-Marie Cavada to restrict the right to publish pictures of buildings and artworks permanently installed in public places (“freedom of panorama”) was voted down by a huge margin. The majority that had supported the Cavada amendment in the legal affairs committee vanished under a storm of protest, spearheaded by Wikipedians fighting for their right to include pictures of buildings and artworks in their free encyclopedia.

However, while the final version of the report did not suggest restricting freedom of panorama, it did not include a specific provision to protect it, either. Instead, member countries would still be free in whether and how to implement such a limitation into their respective national copyright laws. In a way, this outcome is a typical example of the widespread copyright extremism in Europe, which blocks even the most sensible and moderate copyright reform proposals.

The overall spectrum of opinions in current copyright debates ranges from abolitionism, that is, proposals to discard copyright altogether, to copyright extremism on the other side. Copyright abolitionism is a position sparsely mentioned in regulatory conversations. While authors Joost Smiers and Marieke van Schindel, for instance, have managed to create some buzz around their book “No Copyright”, the attention was only short-lived and the discussion left no real lasting mark on the conversation overall. And abolitionist positions brought forward by libertarian researchers such as Michele Boldrin, David K. Levine and their colleagues have only played a very marginal role in scientific discourse, as well.

However, we observe that rhetoric around ratcheting up extreme copyright protections plays a major role in the mainstream of regulatory conversations around copyright, while rarely recognized and called out as extremism. Rather, even the most far reaching positions are considered perfectly legitimate when brought forward in committee hearings, policy papers or campaigns. In a way, current copyright discourse is heavily skewed towards the side of copyright extremism, which makes any moderate and balanced reform of copyright laws difficult, if not impossible. Taking a closer look at the relentless rhetoric of copyright extremism might therefore help to identify and address this problem.

However, such a stance ignores that not only too little protection might lead to a “Tragedy of the Commons” (with suboptimal provision and utilization of creative works), but also that too much protection might lead to the same result – something Michael Heller has termed “Tragedy of the Anticommons” (see also his book “The Gridlock Economy”). With increasing length and scope of copyright protection, the process of clearing rights becomes ever more difficult and costly, thus prohibiting the creation of new works and businesses that depend on access to previous works. In a way, copyright protection follows the old saying in life: you can have too much of a good thing.

An example of anti-commons problems are music mashups, which creatively re-combine pieces of different songs to create new compositions. Mashups are increasingly popular in social networks – David Wessel aka “Mashup Germany” has 250,000 fans on Facebook – but they are not played on the radio and cannot be purchased as downloads due to rights-clearing issues. Sharing a mashup online (even without a profit motive) might lead to a swift copyright takedown notice or an account being blocked on platforms such as Soundcloud. In effect, a vibrant and creative music genre is being marginalized because of an overly-restrictive copyright regime.

The relation between copyright protection level and positive effects on provision and usage of creative works follows an inverted U-shape, as illustrated in the figure below. You can see the extreme positions represented at either end of the U-curve, where supporters instead advocate for abolishing or maximizing copyright protection, respectively. 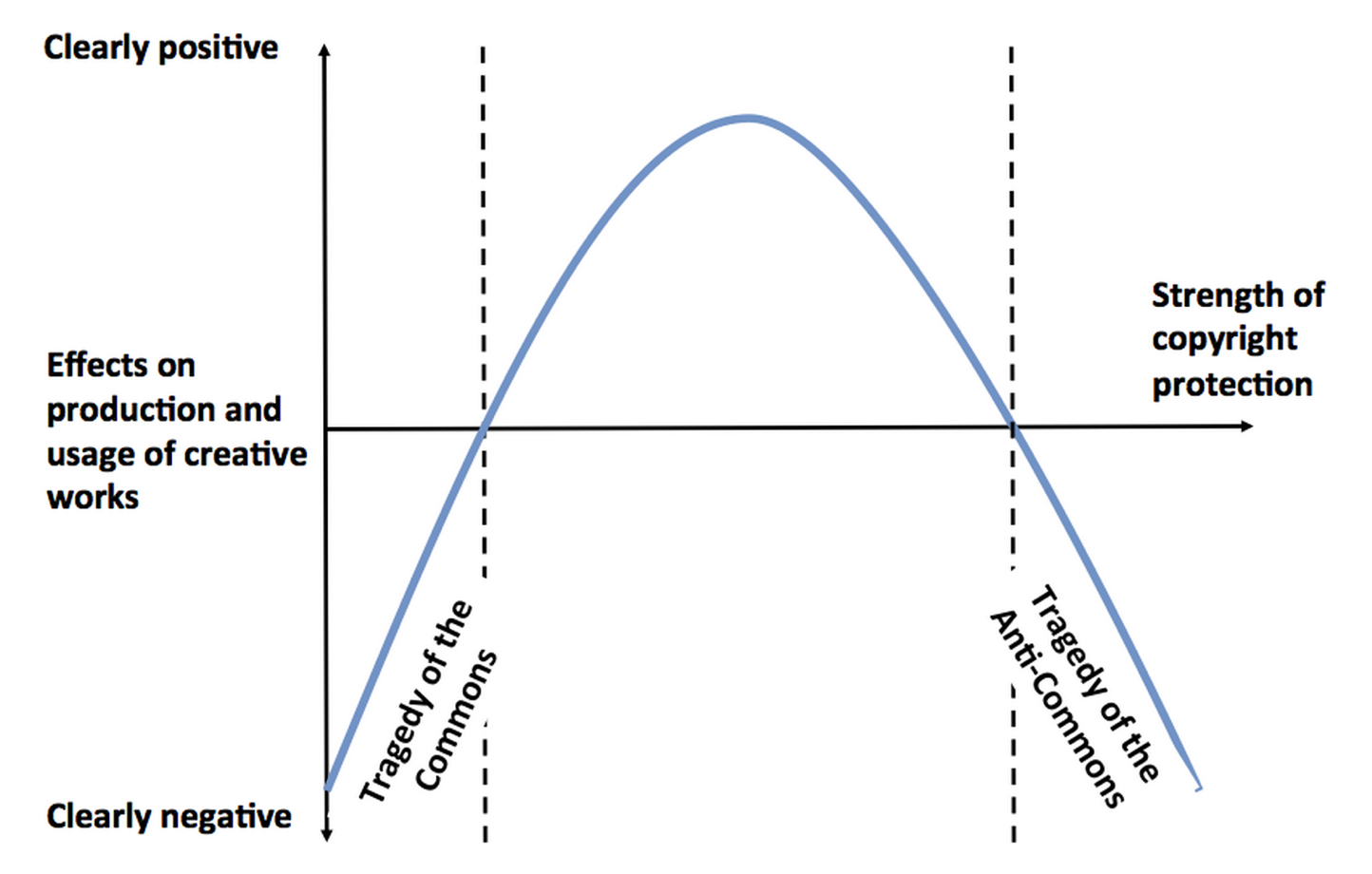 When reading through the comments from conventional rightsholders to the questions on the EU Commission’s public consultation on copyright, one might think that we are already living in the best possible copyright environment. Aside from stronger enforcement provisions aimed at fighting online piracy, many respondents didn’t see any need for copyright reform; clearing rights individually for each use or via a collecting society is deemed to be sufficient.

Such an assessment of existing copyright law puzzles anyone that runs into copyright barriers all across the web in the course of even the most mundane activities such as uploading smartphone videos – not to mention those engaging in new creative practices such as remix, mashups or memes. Just a few years ago, copyright had been a niche topic mainly concerning professional artists and creative industries. Today, everyday online practices of average users regularly intersect with copyright law.

Also, the current regime of optional limitations and exceptions to copyright law – with country-specific implementations throughout the EU – is one of the major obstacles in achieving a digital single market (see also a recent call by leading copyright scholars for a unification of EU copyright.)

In addition, technological advances affect the balance between stakeholder groups. While libraries can lend printed books without restrictions, there is no corresponding right for them to lend e-books; instead, librarians struggle with copy-protection measures (Digital Rights Management, DRM) and restrictive contract agreements with publishers, which may even prevent uses covered by existing copyright exceptions. The current legal situation prevents society from realizing the massive potential for increasing access to digital works. Instead, our legal regime is making the use of digital works often more difficult than printed works – even when it comes to online usage (see, for instance, a recent decision by the EU court of justice on the right of libraries to digitize and make available printed books).

The two rhetorical strategies discussed so far constitute the kind of positioning represented in the right hand corner of the figure above. The third strategy is different from the first two, since it is only reactive, trying to disavow criticism of an overly restrictive copyright regime. The key argument is that any reduction in protection levels only boosts the profits of incumbent platform providers such as Google, Facebook or Amazon at the expense of the creator’s income. However, such an outcome is neither universal nor inevitable.

In fact, the often-criticized large platform providers can perfectly live within the current state of copyright law. They have the resources and the market position to clear rights and to bear the costs of regulatory uncertainties. With its Content ID algorithm, Google’s video service YouTube even manages to make a profit out of an impenetrable thicket of rights, while at the same time increasing market entry barriers for competitors. To a certain degree, an overly complex and restrictive copyright regime strengthens the position of large platforms, with non-superstar artists such as Zoe Keating paying the price. Less permission culture–that is rights clearing between individual parties–and more collective licensing (such as in the case of traditional radio or web radio) would increase diversity of and competition between service providers.

The consequences of individual copyright reform proposals such as new limitations to copyright (e.g. a remix exception) or a unified EU copyright on income distribution among creatives and intermediaries cannot be known a priori; rather, consequences strongly depend on design and implementation of any such reform proposal (e.g. via lump sum payments in exchange for new exceptions). This is compounded since the distributive effects of both technological and regulatory changes are mediated by contracts with publishers (see, for example, the recently leaked contract details between Sony Music and Spotify, which revealed provisions at the expense of artists).

More than ten years after the EU passed its EU copyright directive, we can observe a growing consensus that copyright laws need to change to account for the potential of the internet and new digital technologies. The Commissioner for Digital Economy and Society Günther Oettinger tweeted “We are in the midst of digital revolution. We need a copyright reform”, and the EU Parliament adopted MEP Reda’s report outlining potential changes to the copyright directive. However, when it comes to actual reform proposals, as was outlined by Paul Keller in his assessment of the Reda report, politicians “fail to demand real copyright reform”. Many proposed changes to copyright regulation are considered inadequate to address the massive upcoming challenges presented by pervasive digital technologies and the ease of sharing on the web.

To a certain degree, this is due to the fact that copyright extremism is not recognized as such and treated accordingly. Imagine how much farther we would be if we collectively acknowledged three simple truths central to the debate on copyright reform: (1) copyright protection levels can sometimes be too low (resulting in suboptimal utilization of creative works) and sometimes be too high (resulting in near-perpetual copyright terms, permission culture, and expansion of rights into new areas); (2) the internet and new digital technologies require changes in current copyright regulation for it to become balanced with respect to stakeholder interests; and (3) weaker copyright protection and stronger (and harmonized) limitations to copyright are rarely in the interests of large platform providers, with distributive effects depending on design and implementation of reform proposals.

As soon as these simple truths can constitute a shared starting point in ongoing copyright debates, the question will no longer be whether we need copyright reform but rather which reform we want. This would still leave enough room for controversy, but hopefully prompt a more fruitful and constructive conversation.

Featured Blog post:
We Are Looking for a Policy Advisor
by COMMUNIA Association
Read more
Newer post
On the need to protect copyright exceptions from contractual interference
Older post
Alternative Compensation Systems only work if adopted by all sides